Before I had children my husband and I used to debate, were kids less safe today than when we were growing up?

I argued yes, and he said no; statistically they were not.

I felt they had to be because look at all the horror stories on the news, and look at how much less children play outside today, well at least on their own, compared to when we were kids.

We both grew up in the 80’s. Now let me preface this by saying I am talking about children in the United States.

There are many places in the world where children are not safe. But, here at home the debate rages on.. are children less safe today than when we were growing up?

Once I was pregnant and getting ready to have a baby I decided to research how safe children are these days myself.

What I found led me to realize my husband was right, kids are safer today than they used to be. But, only in some ways. There are new dangers and challenges we did not grow up with back in the 80’s. The internet and social media being the main one.

But what about playing outside? And stranger abduction?

Now that I have three children of my own I will admit, I don’t really see letting my five year old go down the street to the park on her own. I’m not even sure about letting her play in the yard alone.

This is sad but if the view of my yard is obstructed I won’t let her go out there without someone watching her.

Why do I feel this way? I know when I was five I was running a few houses down to a friend’s house and going all over the neighborhood. I am sure I have been influenced by the current state of parenting and stories seen in the media.

There was a case couple of years ago local (to me) about two children who were out playing in a park alone less than a mile from home, ages six and ten. Before the children could make their way home the police picked them up and held onto them for six hours.

The parents had Child Protective Services open a case to look into them for allowing their children to play alone. It caused a lot of debate and controversy about “free range parenting” vs “helicopter parenting”.

I love the idea of free range parenting. Let them be free, let them explore, let them become independent, but as I said above I am probably not comfortable actually doing it.

Contents hide
1 The actual statistics on child safety today
2 It has been found that child mortality rates have fallen by half since 1990
3 Missing children are down 40% since 1997
4 Children are also less likely to be struct by cars while out playing
5 If children are safer now than ever why we tend to believe children are less safe?
6 There is a new danger though, one we did not have growing up
7 Conclusion

There was a Washington Post article written about the case mentioned above. In the article they shared some facts about child safety in America today.

This can be attributed to use of childhood vaccines, and homicides having a large drop among children. 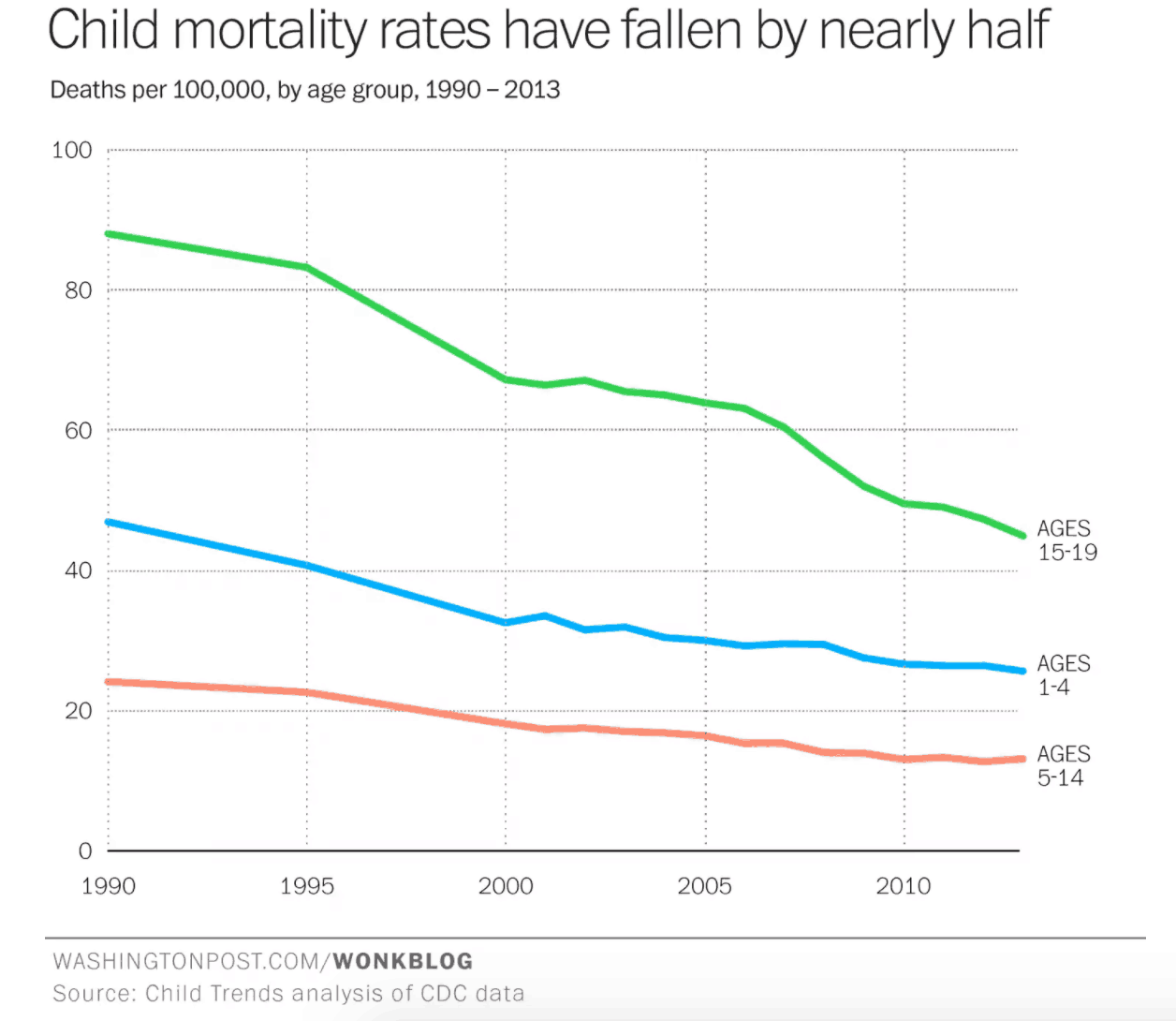 Most missing children are runaways, and actual abductions are extremely rare. 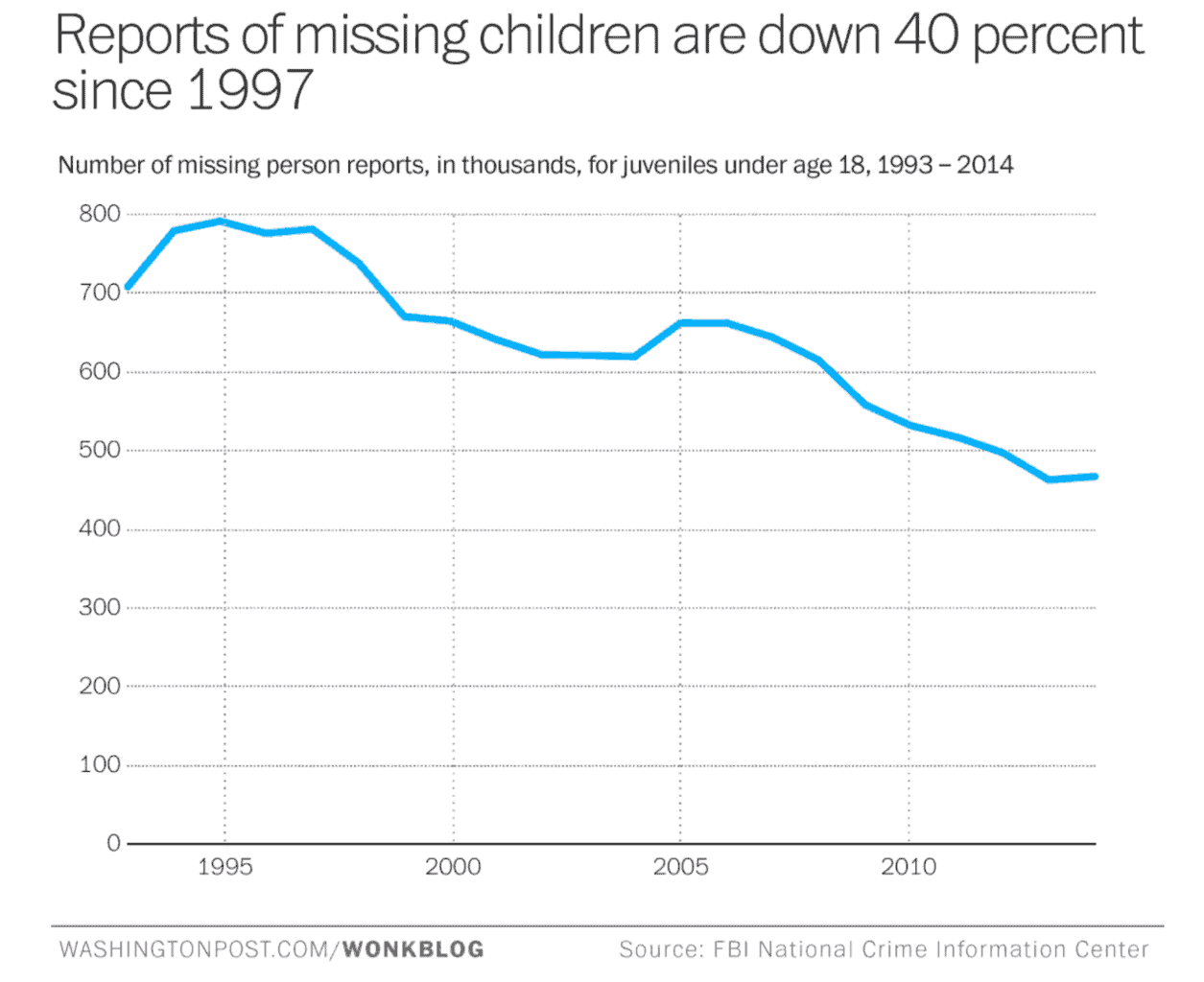 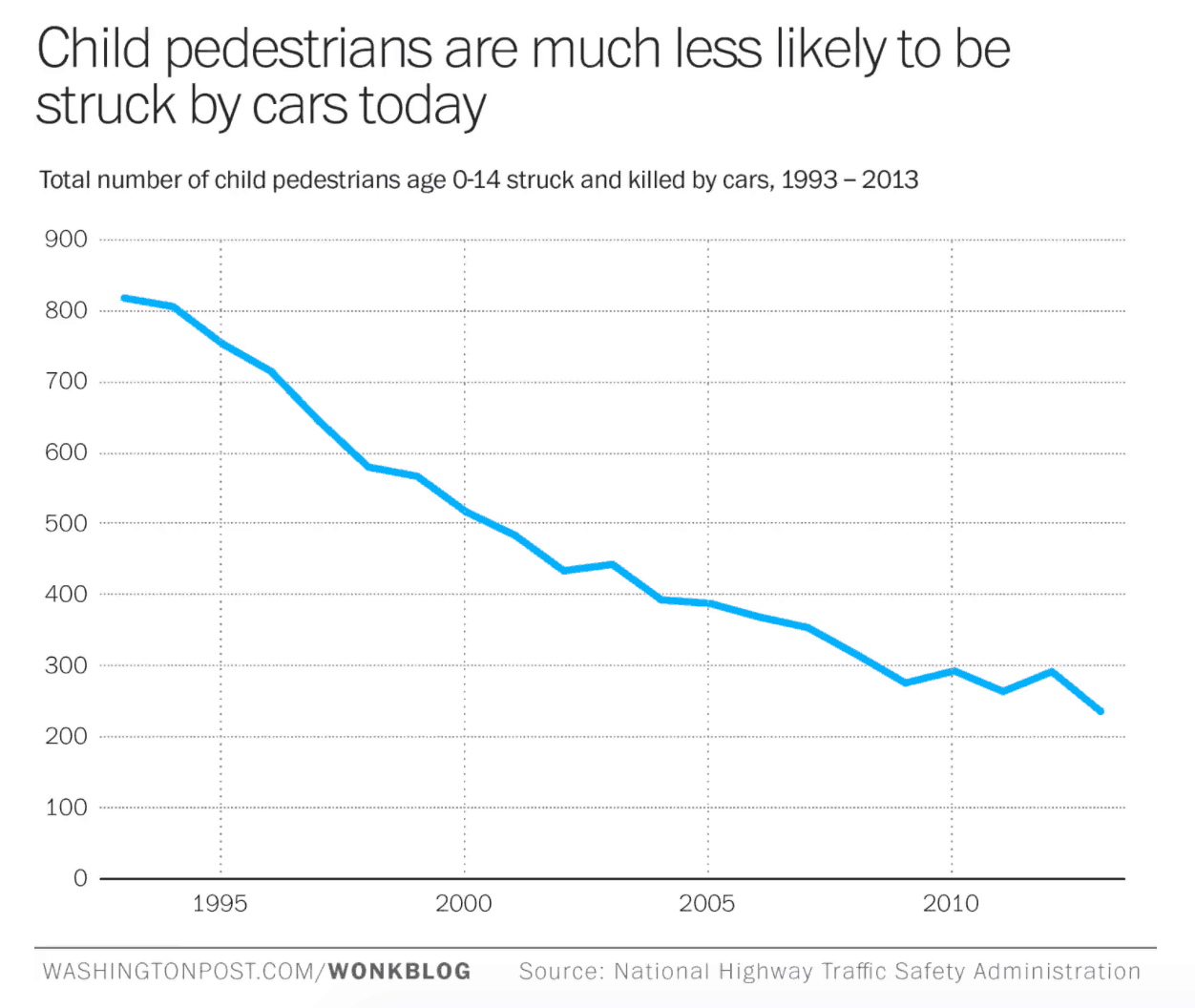 As the Washington Post points out these numbers have gone down while the actual population has increased.

Well this is my theory although I have read similar ones which helped shape it.

Back in the 80’s (when I was kid and running free) we started to hear stories about missing children more frequently. When a child went missing it was well spread among the media and awareness increased. Before this time period nobody heard much about danger to children in the form of abductions or other accidents.

Photos of missing children went on milk cartons. This was the start of the rise of helicopter parenting. Now as we are more aware of the danger we became more protective.

Add to this the rise of cable television and the internet, and we now hear everything that happens in real time as it is happening.

The danger was more real, we heard about it all the time. And, these days as a parent I cannot log into Facebook or any social media without seeing a story about something bad happening to a child. Or a study about a new danger to children.

I try to keep in mind my children are not less safe. It only feels this way sometimes.

There is a new danger though, one we did not have growing up

While children are much safer today when it comes to playing outside, and other dangers associated with outdoor freedom, the internet has led to new safety concerns.

Online predators scare me and they do exist and hope to exploit children and teens. I am planning to further research the statistics on this and follow up with another article about children and online dangers.

Add in bullying, peer pressure, and the fact that many kids and teens don’t seem to understand the consequences of everything they post online, and this is a new and different threat than the older ones we grew up with.

I will leave you with this helpful infographic about how teens and technology have changed over the years, and will have more on this subject in the future.

When it comes to outside dangers such as playing alone in a park, walking outside, or being abducted by a stranger our children are statistically safer.

When it comes to new dangers from the Internet such as online predators, or bullying we are in a newer unknown territory. I will have a future post with more on this subject.

In the meantime please let me know, do you feel your children are safer or less safe than you were growing up?

Previous Post: « Fun Things to Do Outside With Kids This Summer
Next Post: Is The 8 Quart Instant Pot Too Big? »

We are a participant in the Amazon Services LLC Associates Program, an affiliate advertising program designed to provide a means for us to earn fees by linking to Amazon.com and affiliated sites.